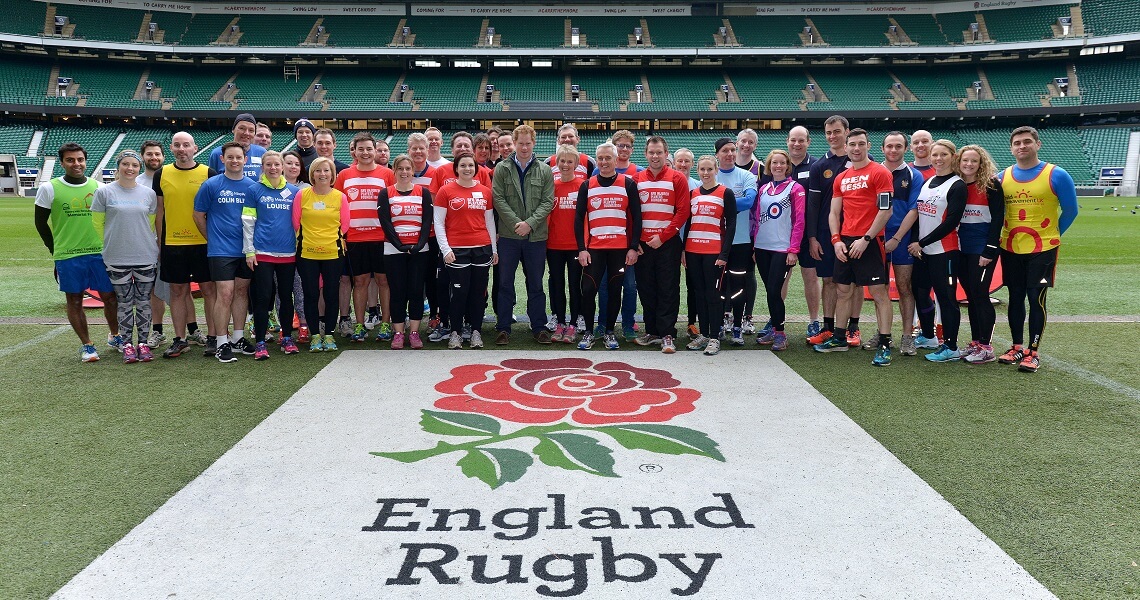 Prince Harry paid a visit to Twickenham Stadium to meet runners training for the London Marathon. The session was hosted by the RFU Injured Players Foundation (IPF) on behalf of charities involved in the Charities Forum, the collection of charities of which The Duke and Duchess of Cambridge and Prince Harry are patrons.

This is the fourth year running that the IPF have held the training event for the Charities Forum runners. The 60 attendees undertook a workshop on nutrition led by England Rugby Nutritionist Matt Lovell, one on injury prevention run by England Rugby Head of Physiotherapy Barney Kenny and were given advice on fundraising by the IPF’s Liam O’Reilly.

Prince Harry spoke to the IPF runners about their marathon preparations and was on hand to offer encouragement as they were put through their paces by a team of Army PTIs led by SSgt D Bishop of the 1st Battalion Irish Guards alongside LCpl Damm, LCpl Crawford and also Cpl Corby of the 7 Rifles.

IPF Director Dr Mike England said: “We are extremely proud to host this event for the fourth year and to have Prince Harry join us here today.

“There’s been a great atmosphere and camaraderie among all of the attendees. We hope that everyone has found today’s sessions useful and can take away some great advice as they prepare for the final 12 weeks ahead of their challenge. The IPF would like to wish everyone taking part in this year’s marathon the very best of luck.”

The London Marathon awards five marathon places to each of the charities, including the IPF, involved in the Charities Forum as a result of Prince Harry's Patronage of the London Marathon Charitable Trust. The allocation gives the charities and organisations an extra opportunity to raise money for their causes.