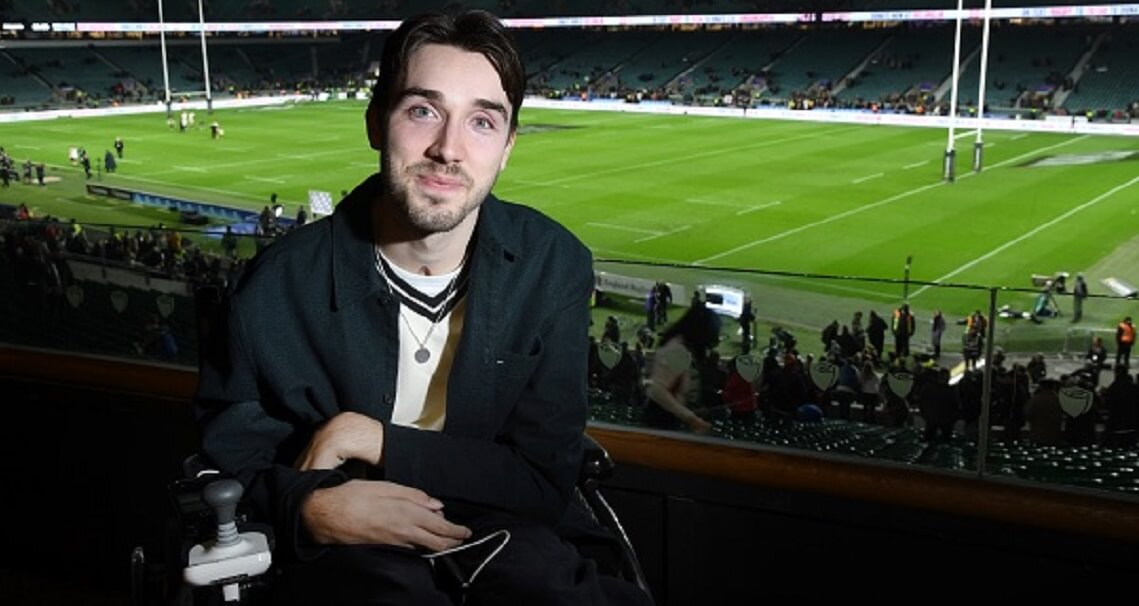 Google searches frequently ask “Is the actor who plays Isaac really in a wheelchair?” and George, who has come to the RFU Injured Players Foundation hospitality box to watch England play Ireland smiles.

“Being an actor as part of the minority community means you are an advocate whether you want to be or not,” he says. The industry is moving forward and if non-disabled actors are cast in my kind of part these days it’s going to be called out.

“As Isaac I just show that disabled people are everything: We’re fathers, we’re sons, we go through economic problems, we have problems with relationships, we have all of these things. And yes, we are intimate sexual beings just like everyone else.”

George was catastrophically injured in July 2015 playing outside centre for Stanford School who were on tour in Capetown.

He was 17 and explains the situation as “a poor tackle, a freak accident”. In the ambulance he joked with the medics. George is a joker, like his character Isaac. But when he got to the hospital, he asked a doctor “Am I going to walk again?” and heard the response “I don’t know.”

Operated on within two hours, when he woke up, he saw the scans which answered his question. His parents flew out and “I spent my 18th birthday in hospital. It was wild but not in the way I’d expected,” says George. “I was in hospital in South Africa for 37 days, and 37 was my squad number!”

He flew back to 10 months in Addenbrookes and Sheffield Spinal Centre and then completed his final year in school before studying philosophy at Birmingham University, where he took an evening course in screen acting and sent clips to a specialist agency.

Having secured the role in Sex Education, George has been “prioritising the acting, although I keep saying I will go back and finish the degree.

“I went for the audition around the time England had lost to Wales in 2021 and, with the show set in Wales and the casting director being Welsh, I was pretty annoyed in a jokey rugby fan kind of way and they seemed to like it,” says George. “When I got the part, it was great, the first time you get paid for acting, for doing something you’ve always wanted to do, is a weird experience.”

George is tremendously appreciative of the support that he and his family have had from the Injured Players Foundation. “They have been amazing,” he says. “With my injury happening on the other side of the world, the IPF were there for my family and had great communication with rugby out there. Now, as I plan to move into a home of my own and leave my parents’ house, they are being tremendous in making sure that happens. I’m very, very grateful.”