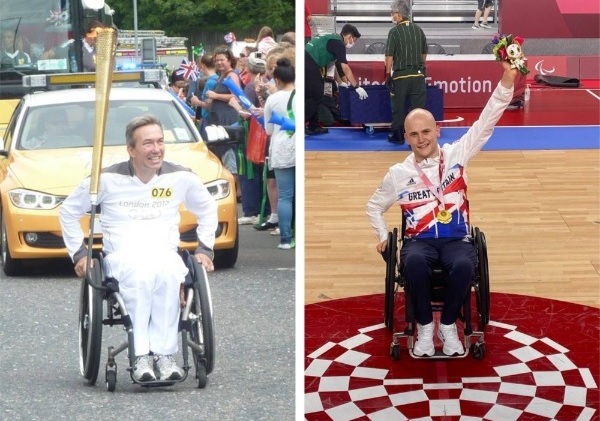 Nick, who competed in wheelchair tennis for Great Britian and became the national double champion, is now a leading sports medicine specialist, with particular expertise in the area of disability. Like Jack, Nick too was at Tokyo 2020 and it was his 11th Paralympic Games.

Having developed an academic career as a world-leading researcher in injury and illness prevention in Paralympic sport, Nick is a Clinical Professor in Sport and Exercise Medicine at the University of Brighton and a member of the International Paralympic Committee’s Medical Committee. More then a career, Nick has found his passion and purpose in life through his involvement in sport and the Paralympic movement

“One can choose to face one's challenge or not. It has not been easy with pain and immobility as part of life but that is the hand I was dealt. I recognise that you need support – family, friends, colleagues – but you also need an environment in which to be able to grow and thrive, which I why I am so pleased to try and help others achieve their goals through sport, now as Chair of the British Paralympic Association, to meet the vision “Through sport to inspire a better world for disabled people”.“Although the IPF did not exist when I was first injured I have seen how it has grown and helped so many people and it is symbolic of the spirit within the rugby community. I was privileged to attend a ‘learn to sit-ski’ course in Andorra with a group from the Injured Players Foundation and the camaraderie of the injured players and support staff shone through. I am hugely grateful to all those that support and fundraise for this wonderful organisation.”

Is one of 12 Team GB wheelchair rugby athletes at theTokyo 2020 Paralympic Games who's historic gold-medal win drew a television audience of over a million.

Despite initially losing their funding after a fifth-place finish at Rio 2016 and against the backdrop of a global pandemic; the team secured funding from commercial sponsors, philanthropic donations and UK Sport Aspiratio, enabling them to develop and instigate a world-class training and competition schedule.

Wheelchair rugby became Jack’s passion after Sean Lacey from the Spinal Injuries Association encouraged him to go to the local club, The North East Bulls. He progressed to Leicester Tigers Wheelchair Rugby and by hard work and dedication to the GB team. Athletes are classified on levels of ability from 0.5 to 3.5, Jack being classified as 1.

“This was my dream for six or seven years and the IPF were so great. I was getting messages from other clients that I hadn’t met. Everyone was fantastic. I’ went to my old club Billingham to show them my medal and take them a vest for the wall.”

“The MBE is a great honour and I think we all feel it’s an unbelievable recognition of doing something we truly enjoy. I hope it helps with the growth of wheelchair rugby and encourages further funding as we head into the Europeans and beyond."