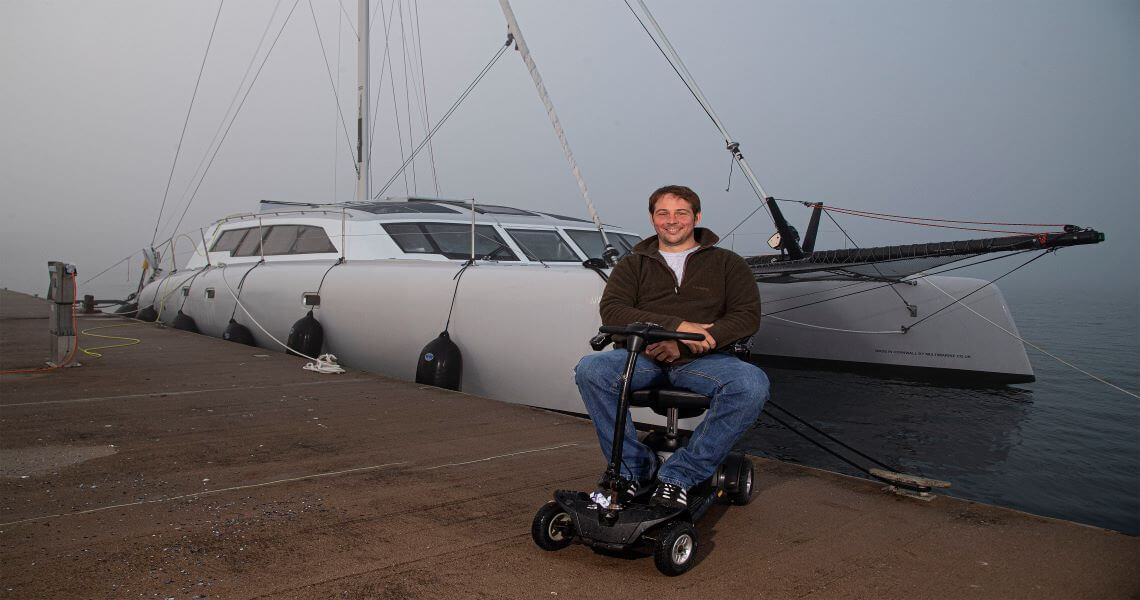 Catastrophically injured playing rugby having just returned as an Army captain from a tour of Afghanistan, Tom Hughes has set off on his accessible catamaran Artemis to sail the world, having planned the trip for six years.

Leaving on the tide from Plymouth’s Mayflower Dock seemed appropriate as Tom’s intrepid spirit matches that of the early Pilgrims who set out for the New World. Much of Tom’s trip will, however, see him exploring new worlds under the ocean.

A Fellow of the Royal Geographical Society, his exploration on land, coast and beneath the sea, sees him well equipped. Qualifying as a technical diver and diving instructor since his injury, he is also trained to use a rebreather, allowing him to dive for longer and without the bubbles to stop him getting up close to marine creatures.

During the pandemic he spent months creating a unique 4 x 4 camper van. Bought on eBay, and designed and kitted out by Tom, it has its own communications system and power. It can pump up its own tyres, lift Tom into bed, stow his Terrain hopper all-terrain wheelchair and power its own kitchen. With souped up suspension, it can go where no ordinary camper van could venture.

It too will travel the world, shipped out to the destinations on Tom’s trip. When Tom is on board or on shore, he will have radio communications from van and Artemis, which was designed and purpose built in Millbrook, Cornwall, by Dazcat Multimarine.

The boat is named after one of the most important Greek deities, the goddess of hunting, and obliquely after Tom’s mother Diane, akin to Diana, the same goddess in Roman mythology.

Sea trials went well earlier this year and Tom spent the summer sailing the west coast of Scotland preparing for the trip.

“I am very happy with how she sails,” he said. “And it’s great to be setting off after years of planning and preparation. I’m heading to Gibraltar, then the east coast of Spain, potentially north Africa and then, in mid November, across to the Caribbean. I’ll be away for a couple of years.”

A client of the RFU Injured Players Foundation ever since he broke his neck in a rugby match as he built towards selection for the Army v Navy game, Tom says the charity is “absolutely fantastic. I can’t speak highly enough of the help they have given to me and all the other clients.”

His list includes helping him buy a home, get specialist physio, purchasing his Terrain hopper, his rebreather and funding his PhD. Since his injury, Tom has completed a Defence Fellowship at Oxford, a Masters Degree via Glasgow and a PhD in International Relations at St Andrews.

Now he’s continuing to conquer the world taking Artemis through the most daunting oceans and to some of the most beautiful and remote outcrops of land. Everyone involved with the Injured Players Foundation and the game wishes him well on his remarkable expedition and will be watching his progress as he continues to act as an inspiration to us all.