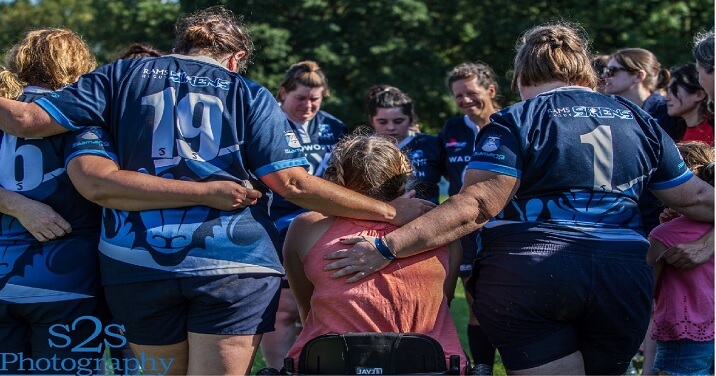 Rugby clubs are the hubs of the rugby family within the local community, many of whom fundraise each season for the RFU IPF.

Since 2017 when one of their Sirens team players, Dani, sustained a life changing injury, the Rams RFC have witnessed first-hand the high level of support the charity provides players from the initial injury and through the rest of their lives.

Said Gary Reynolds, RAMS RFC Chief Executive, “Fortunately, life changing injuries, like the one suffered by Dani in October 2017, are very few and far between. The IPF got involved from day one - they met us at the hospital, liaised with Dani straight away and made advice & help available when she most needed it. They continue to be there for Dani and for us. Everyone at Rams, having witnessed first-hand the priceless work of this brilliant charity, is determined to support the IPF so that they will be there in the future for any player or club that needs them”.

It’s because of this The Rams have made fundraising an integral part of their rugby calendar. From regular fundraising lunches to taking part in challenge events. The whole club get behind their fundraising campaigns, including the Men’s 1st team putting the Charity’s logo on their kit to help spread awareness during their games.

For the 21/22 season, the club are looking to take their fundraising further by incorporating a charitable donation option as part of their online membership payment system. By enabling members to easily make a donation when they pay their subs each year, the club hopes that the money raised will have an even bigger impact to the support the charity can provide others in the rugby family who suffer a life changing injury like Dani whilst playing.

Said Karen Hood, Head of the IPF “Rams RFC provided fantastic support to Dani and her family when she was injured, and it’s wonderful that this spirit continues today. Through their fundraising, and the efforts of the whole rugby community the IPF is in a position to be able to offer the same support to other players on the rare occasions that these accidents happen. By introducing a donation to the Rams club membership scheme, the rugby family is able to benefit into the future, with minimal ongoing effort by the club individuals who have worked so hard to support both Dani and the IPF.”

To find out more how your club can support the RFU IPF, please click here.