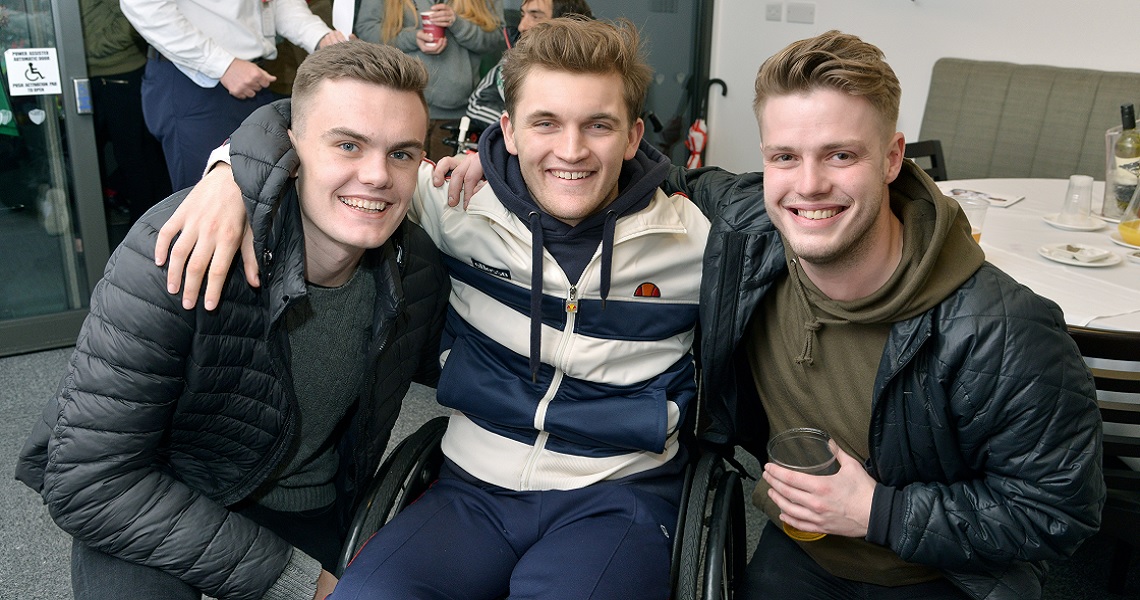 Four years ago Harry Langley was injured playing hooker for the University of Sussex when he was 20. Since then he has shifted his focus to wheelchair rugby and is now aiming to represent Team GB at the Paralympic Games.

Having spent seven weeks in St George’s Hospital with a serious spinal injury, he was watching the London Wheelchair Rugby Club train at Stanmore, where he was to spend another four months.

“I decided then that was what I wanted to do. I wanted to play wheelchair rugby like them,” he says.

Now Harry is one of their players and vice-captain of the GB Wheelchair Talent Squad. His ultimate ambition is to be a bolter for the Tokyo Paralympics.

“If not, then for the Paralympics after that,” he says with a grin. “I’m 24 now and the youngest of the elite team is 26. I’ve got time on my side but I’m impatient!”

He is also committed. “Wheelchair rugby is a big part of my life. I train three or four times a week and when I’m not training I’m in the gym.”

Harry was playing hooker for the University of Sussex first team when he was catastrophically injured.

“People assume it was in a scrum but it wasn’t. It was just one of those rugby accidents and rugby has been there for me ever since,” he says. “The RFU Injured Players Foundation were supporting my parents while I was in intensive care. They brought me an iPad, and a signed England shirt. They’ve funded my rugby chair and helped in lots of other areas. I regularly get to join other injured players in the IPF Box at Twickenham to watch England and they are helping me to move from home and live independently.”

Harry is getting used to “going outside my comfort zone”. IPF vocational rehab has seen him benefit from a public speaking course and he has already been on a platform on a couple of occasions. He spoke at his old school Ravens Wood School to fundraise for GB Wheelchair Rugby’s Paralympic training.

“I was really nervous about standing up and speaking but afterwards I realised I got a real buzz from it,” Harry adds.

It’s the kind of buzz he gets from his sport. He took part in his first GB Talent competition in March 2018 and recently returned from Poland and competing for the Masovia Cup.

“We played teams from France, Germany, Luxemburg and Poland. Though we didn’t win, as a fairly new team with a lot of less experienced players we learned a lot.

“Playing in Europe is very different. You learn to adapt to the situation and the competing teams’ style of play. Those tournaments help you to develop.”

For Harry, it’s still rugby but on wheels. “Socially it’s very similar,” he says. “The rugby camaraderie is there, you trust and rely on your team mates, there’s that connection, that chemistry.”

Harry first joined and then captained Canterbury Hellfire who trained near his home before moving to London Wheelchair Rugby. You sense he’d travel any distance in pursuit of his sporting ambition.

“Both teams I’ve played with have been great,” he says. “It’s rugby, so there are a lot of big personalities, sports minded people. Now it’s a lifestyle for me and having the IPF’s support is fundamental.”

Said Conor Murphy, GB Talent Programme Manager “Harry has become one of the integral members of the GB Wheelchair Rugby Talent Squad despite being relatively new to the sport. His natural leadership attributes got him voted into the position of vice captain for the recent Mazovia Cup international competition. We are looking forward to seeing Harry continuing to improve and fulfil his potential within the sport, and he understands that there will be many more hours of training and learning on the pathway.”

And the IPF will be supporting Harry all the way. To make a donation or discover more about the IPF and how you can support catastrophically injured rugby players throughout their lives, explore our website.