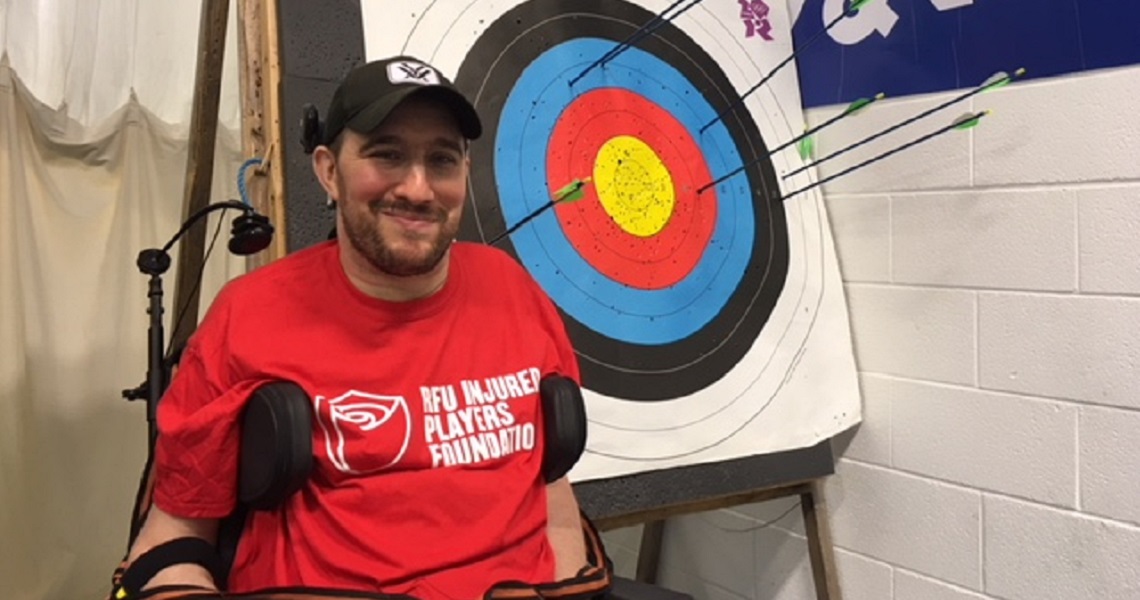 Lee Jones, who was injured playing for his club Silhillians RFC in 2016 aged 35, was unanimously voted to be his club’s chairman at the most recent AGM.

Lee was seriously injured playing for Silhillians RFC in 2016. Now 38, Lee relies on a wheelchair but that hasn't affected his tremendous love for rugby and his club.

Since his catastrophic injury, Lee has been supported by the RFU Injured Players Foundation, by Silhillians RFC, his family and friends to lead his life as independently as possible.

Now Lee will be taking on a key role at the club, having been unanimously voted to take over as chairman at the most recent AGM.

Said Lee: “The club's Director of Rugby contacted me a while ago saying he thought it made sense for me to be the next club chairman. Our chairman was stepping down after 10 years in charge, and as I had been involved in the club since I was a kid, and I was an old boy of Solihull School, which the club is linked to, it made sense.

"It was a conversation I hadn’t expected, but it was actually really nice and well timed, as the chairman stepping down was the person who got me involved in rugby and introduced me to the club. It was like passing the torch in some way.”

“What I didn’t realise was that my name had been put forward some time before and quite a few people at the club had been getting behind me being chairman in the background. At the AGM there was a short discussion on it, then a vote, and it was all agreed. In typical rugby club way, there wasn’t a huge fuss, it was really informal, we didn’t have any presentations or photos, we were all just sat round at the AGM and it all came together.”

Lee is passionate about maintaining the traditions of the rugby club’s 87 year history, and about bringing the entire club together, key areas he will looking to take on in his new role.

“The chairman’s role is going to being split at the club now, with one person taking on a commercially focused role with the board of directors. My role as chairman will be to bring back more of the club’s traditions, like getting everyone back in ties and blazers and designing a club colours blazer, as well as making a big push to unite the club and bring everyone together, from minis & juniors, through to the women’s team and touch rugby teams. I’m really keen to make sure all of the club’s traditions that make Silhillians so special to me get passed on to the next generation.”

“My injury is secondary in this instance; I’m just really looking forward to devoting time to this.”

When asked how he felt about being voted in unanimously and what it meant to be chairman of the club he had played for since he was a boy, Lee said:

“To be honest, when I first heard about this I thought this was a massive mountain to climb so there was a bit of trepidation, but I soon realised this was do-able, I just needed to bring more people in around me, and to orchestrate a team that would be needed to make sure we achieved everything we were setting out to accomplish. I spoke to quite a few other players from the club who were facing the end of their playing days and got them on-board, so we’ve got eight or nine new guys involved in addition to the committee, who are all really keen to make a difference at the club, like me.”

“Now I just feel really really proud, I know I can do this, and that together we’ve got this.”

To find out how you can support the Injured Players Foundation get involved and start supporting catastrophically injured rugby players, whether that’s taking on a run or by organising a quiz night at your local rugby club, please get in touch on This email address is being protected from spambots. You need JavaScript enabled to view it. or visit https://www.rfuipf.org.uk/get-involved