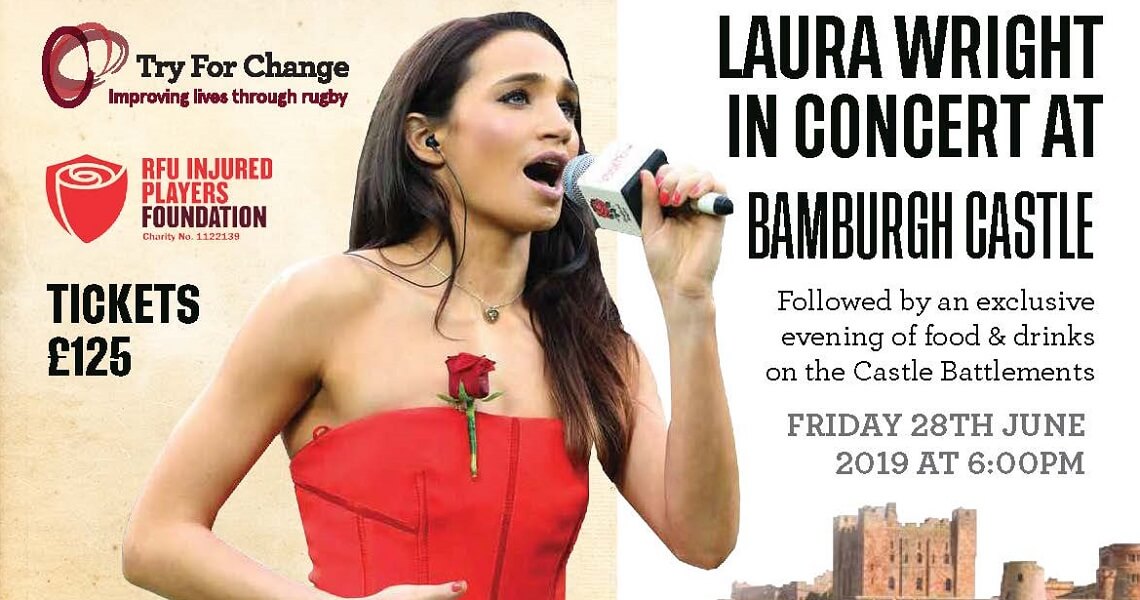 On 28th June Laura Wright will perform in a charity concert at the historic Bamburgh Castle in aid of the RFU Injured Players Foundation.

She has sung for Her Majesty the Queen, wrote and performed the official song at the Invictus Games and is a favourite of the Twickenham crowd when performing the national anthem, not to mention selling more than a million albums.

Now Laura Wright, the popular soprano, who has played rugby herself, is coming to Bamburgh Castle for a concert hosted by Rugby Football Union President Chris Kelly and supported by Northumberland Rugby.

Laura will delight guests with famous classical pieces alongside rugby fan favourites. The concert will raise funds for the RFU Injured Players Foundation, which provides lifelong support for catastrophically injured rugby players in England, and Try for Change, England Rugby’s partnership with Sport Relief which uses the power of rugby union to improve the lives of disadvantaged people in England and across the world.

On Friday 28th June 2019, an intimate audience of just 150 guests will enjoy exclusive access to the prestigious castle’s grounds, including a welcome reception of drinks and canapes on the Battery Terrace overlooking the Northumberland coast, before taking in the grand King’s Hall for Laura’s performance, followed by a short fundraising auction and the chance to enjoy drinks and locally sourced seafood and meats cooked and served on the castle Battlements.

The Grade 1 listed Bamburgh Castle has a history including Celtic, Anglo-Saxon, Viking and Norman occupation, in addition to being the first castle in England to be defeated by gunpowder artillery during the War of the Roses. The castle was later bought by Victorian era Tyneside industrialist William Armstrong, who completed its restoration. The Armstrong family remain the owners of the castle today and have donated it as a spellbinding venue for Laura’s performance.

Tickets to the concert are available at £125 and include all food, wine, and drinks throughout the evening in addition to the intimate concert and a donation to both charities.

To purchase tickets and for enquiries, email Penny Stewart at Northumberland Rugby on This email address is being protected from spambots. You need JavaScript enabled to view it.

The night will also include a charity auction which will be accepting sealed bids in advance of the event. Auction lots will include tickets and hospitality to the England v Italy match at St. James' Park, a 3-night break in Bamburgh, fishing on the River Tweed, and shooting at Blawearie. A full list of auction lots can be found below: 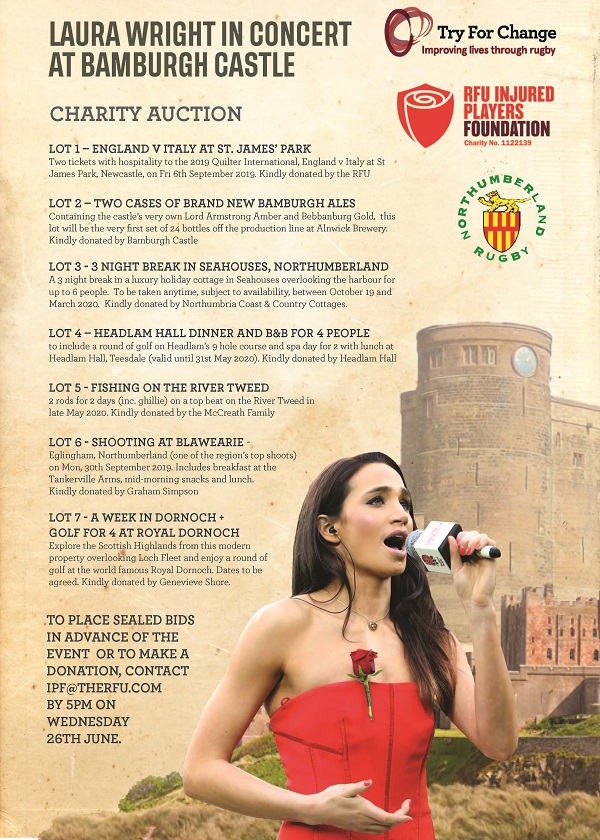 Auction bids or donations can be made by emailing This email address is being protected from spambots. You need JavaScript enabled to view it. by 5pm on Wednesday 26th June.

For more information on Try for Change visit https://www.englandrugby.com/about-the-rfu/try-for-change/