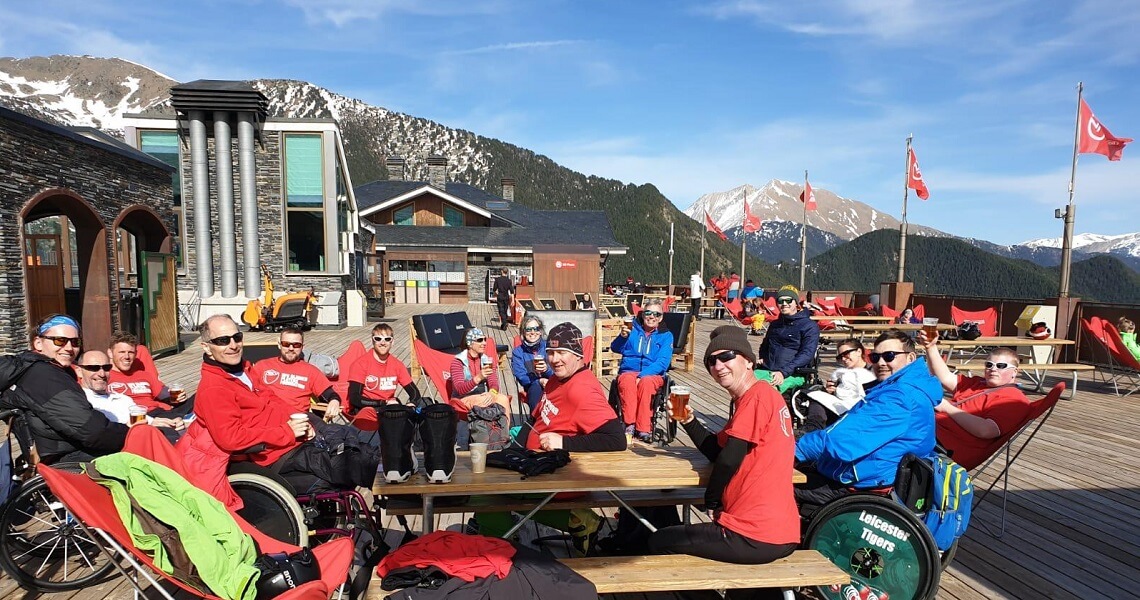 "We're not part of a club, we're part of a family" said one of the RFU Injured Players Foundation skiers when asked who this remarkable bunch were zooming down the slopes of Andorra.

The charity’s Engage Programme is all about getting catastrophically injured players active and challenged, building their confidence and self-esteem. Last month a group of six injured players and eight helpers flew out to Toulouse and journeyed on to Arinsal, a small ski resort in the Pyrenees.

Everyone had tried their skills on the indoor slopes at Hemel Hempstead, Tamworth or Manchester before the eight-day trip, with six days on the piste. On the trip were Tom Horey, Jack Fishwick , Richard Engelgardt, Kevin Ware, Nick Young and Nick Webborn, who is Chair of the British Paralympic Association and one of the UK’s leading sports medicine specialists.

The instructors were from Disability Snowsport UK, led by Steve Smaj who was impressed to see all progress from being led by instructors to controlling their own skis and everyone skiing from the top of the mountain on red as well as blue runs.

As might be expected of both rugby players and skiers there was plenty of apres ski jollity, including a nightly court session and singing in the Irish bar. The group also gathered to watch Northampton v Leicester, although avid Tigers fan Richard Engelgardt, who even has Tigers branded wheels, had to be consoled over the result.

Said the IPF’s Welfare Officer: “I was tremendously proud of the way the injured players tackled the challenges before them, every one of them achieving more than they had expected to. They surpassed the expectations of the instructors who said they were a great bunch to coach. The entire squad looked after each other in the way that only touring rugby players do.

Richard Engelgardt added: “Going on the dry ski slope and then this trip was absolutely brilliant and just what we, as injured players, need. Before my injury I had skied regularly since I was a kid and I thought I would never ski again after it but there I was hitting the big slopes thanks to the IPF.”

For this group, the next test is to use their new-found confidence in their local communities. Hopefully, their recent achievements will help them to face their everyday challenges with greater energy and self-belief.

For info more about the work of the IPF and how you can get involved, see the links below.