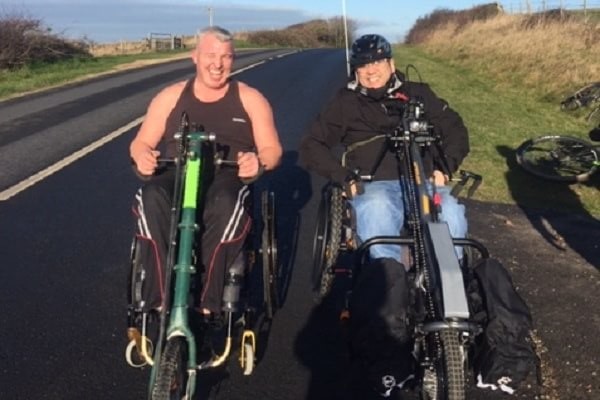 Steve Bavington, who was catastrophically injured while playing rugby in the Army in 1989, is taking part in the 2019 100km Randonnee cycle around the Isle of Wight, using his new Hybrid Assisted Handbike provided by the IPF.

30 years ago (8th February 1989), Steve was playing rugby in the Army, when the scrum collapsed, resulting in a spinal injury at a level of C6/C7. Throughout this time, the RFU Injured Players Foundation have been able to support Steve by funding equipment and adaptions to Steve's family home, allowing him to have a better standard of living. Steve, his wife Lorna, and a team of friends (one of whom will be taking part using Steve's old hand bike) are setting out to take on the Randonee to help Steve, and to give something back in support of he RFU Injured Players Foundation.

We caught up with Steve and his friend Rob recently who told us a bit more about why they are taking on the challenge in support of the IPF.

"I joined the Army straight from school aged 16 yrs old. I started off in the Royal Electrical Mechanical Engineers and then transferred to the Medical Corps, where I was posted to 1st Armoured Field Ambulance in Germany. It was here that I joined the unit rugby team.

"On February 8th 1989, whilst playing, the scrum collapsed, resulting in a spinal injury, at a level of C6/7.

After an initial first year of rehabilitation at Odstock Spinal Unit, now known as Salisbury District Hospital, I returned home to the Isle of Wight, with the support of my family and friends.

Throughout this time, the RFU Injured Players Foundation have been incredibly generous in funding equipment and adaptions to my family home to allow me to have a better standard of living. These include:

My new Hybrid Assisted Hand Bike has enabled me to go on family bike rides and feel like part of the family again. I now feel it is my time to give something back by putting my body on the line and doing a 100km bike ride, around the Island, with my team!"

"I have played rugby since school and have recently started playing on the field with my son. I joined the Parachute Regiment after I left school, but was unfortunately discharged due to an injury. In 2001, I joined the PWRR (Princess of Wales Royal Regiment) and left in 2005 to spend time with my young family.

I started my charity work in 2010, taking part in physical endurance events such as Tough Mudders, The Nuts Challenge and Spartans. In the past I have raised money for the Layla's Trust, Help the Heroes, Stupini Kids and the RFU Injured Players Foundation.

I am known for loving a challenge and when Bav told me he was doing this event, I decided to give myself a challenge too - I am going to do the full 100km cycle ride on Bav's old hand bike!

I have spent a lot of time with Bav and his family, and I want to make people aware of the daily challenges they face as a family and how the funds donated by the RFU Injured Players Foundation, are life changing!" 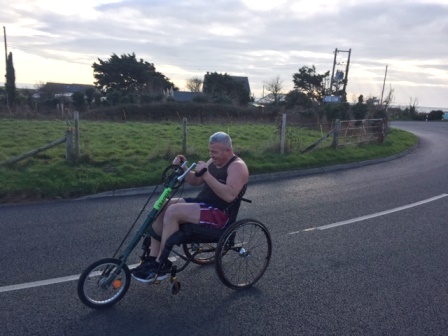 The event takes place on Sunday 5th May 2019, and the team are looking to raise as much money as they possibly can for the RFU IPF, so the charity can continue to provide grants to help change the lives of injured players like Steve and his family.