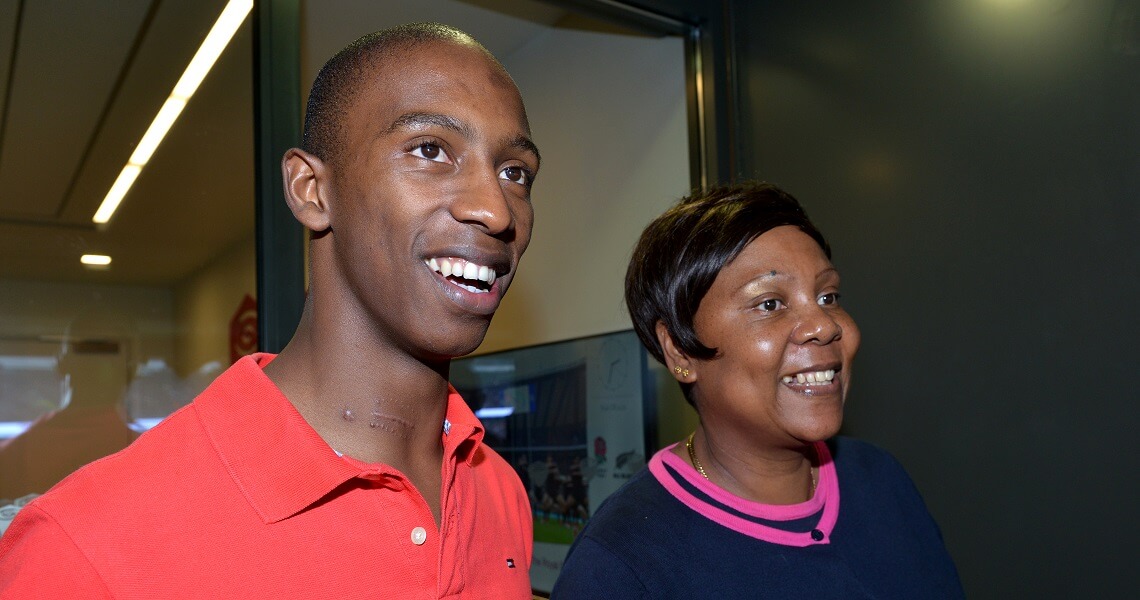 "There wasn’t a single day that the IPF and the club weren’t there for me. It has made me appreciate rugby even more.”

Kudakwashe Mushava, known by his pals as KJ, is a 26-year-old trainee solicitor who was playing for Old Reigatians against London Cornish when half an hour into the game and in the lead, “the ball came out of a ruck. I tackled the opposition player who picked it up. Another player fell on top of me and I felt my neck go, couldn’t move. Team mates shouted for the referee and our physio and the opposition physio ran on. They were magnificent, held my head until the ambulance arrived.”

KJ was taken to St George’s Hospital in London, where ironically his mother, Susan Nyandoro, now a Community Matron in Mid Devon, trained. Mum liked to get a message after a match, especially as her only child was now living at a distance from home. No call came that day and her calls weren’t being answered. “I told my team mates who had stayed with me at the hospital not to talk to mum until I knew what was happening,” says KJ. “I knew something was wrong because I normally got at least a text telling me his team had won. I phoned his mobile six or seven times until they had to answer,” says Susan. “I phoned the hospital, spoke to the registrar and when he told me they were doing an MRA scan I leapt in the car and drove there.” A 2am operation followed and says Susan, “The next morning the IPF were there, becoming part of the family, putting me in a hotel, paying my expenses, taking away all the additional stress. I couldn’t have got through it without them, without someone to talk to so that when I saw my son I could be positive. “The boys from his club have been brilliant and people from Biddeford and London Cornish. I know now why my son loves rugby, it’s the empathy, the love and togetherness. When KJ was in Stanmore for three and a half months I would come home and they would have cooked my dinner.”

And, says KJ, his company Cripps LLP have been great. “They paid me, made adjustments so I could get back to work, amended my contract.” It took six weeks to walk and KJ, says “I still get wobbly and have to think about what I am doing. I go to the physio at my rugby club, get regular massages. I play a role, do some coaching, put out cones. There wasn’t a single day that the IPF and the club weren’t there for me. It has made me appreciate rugby even more.”